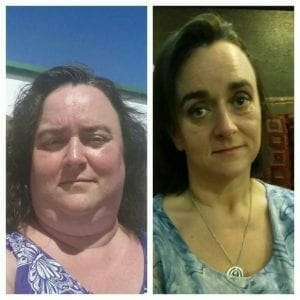 Hi, my name is Susie Birney. I’m 41 years old living in Dublin City. After working unhappily as an accounts clerk I made a drastic change to being a taxi driver in Dublin for 10 years. Unfortunately, lifting heavy cases I developed a hernia and was unable to continue the job I loved.

I love everything to do with swimming. Regardless of my weight I kept swimming regularly. I’m a qualified swimming teacher and have taught children swimming part-time for 26 years now. I’m hoping to return to open water sea races soon.

I recently did a skydive to raise money for charity and I never experienced anything so exhilarating before. I went back and did it twice more before the season ended..it not only felt powerful to be fit enough to jump from a plane at 10,000 feet, but I felt like I woke up and saw new opportunities around me..life had been passing me by while I was so unhappy living with obesity.

My weight didn’t start to increase until I was in my late teenage years when my level of activity and participation in sports decreased. My bad eating habits I’ve had since infancy.

I have a condition called Selective Eating Disorder. I’ve struggled to expand the small list of “safe” foods that I eat. I reject foods based on either the smell, the look, the texture, or the taste. For the most part I won’t even try new foods but for the rare times I do, I am likely to instantly vomit. I’ve never eaten vegetables, salads, most meat, the list is long. I quite often would just eat sandwiches for every meal, for days in a row. While I was active this didn’t make any difference to my weight but as life became busier and I started driving, it quickly increased.

As my weight increased so did my depression. I then began to comfort eat as well as struggle to expand my poor diet.

I tried neuro-linguistic therapy, cognative behavioural therapy and weight watchers many times, all with no success. I became a patient of the weight management clinic in 2009.

At this point diabetes was my biggest concern but I foolishly believed while on my medication I was fine. I developed diabetic retinopathy in 2015.

At this point I argued, and wrote letters to my health insurer, who soon understood it would cost them more to pay the care costs for my health issues if they didn’t support paying for my bariatric surgery. So they did, and everything has taken a dramatic U-turn since my bypass surgery in July 2015. My diabetes has fully reversed, including the retinopathy. My depression is close to gone. I have lost 13 stone (85kgs) and I have energy!

The theme for the next European Obesity Day on May 20th is very appropriate for me personally.
“Tackling Obesity Together”

My weight loss efforts were always on my own. Family and friends cared but always had suggestions that started with “if you just..” They couldn’t understand.

I became involved in a private online support group for the weight management clinic. I found that as soon as I surrounded myself with people who understood what it is like to struggle with obesity, the battle wasn’t quite so difficult.

As an administrator for the group now, my primary objective is to try to help fellow patients understand that it’s when they are struggling that they should stay involved and chatting with others, rather than retreating within themselves as they say they feel shame at losing the battle to stop gaining weight.

By not personally keeping my feelings and negative thoughts to myself, I feel I am more accepting that obesity is something I am going to fight all my life.

I am only new to the Patient Council and have a lot to understand and learn, but I am impressed at the huge work that is being done to increase the awareness of the battle against obesity.

I’d like to do my part in “Tackling Obesity Together”.