How to support people first

How can you support Person/People First Language? 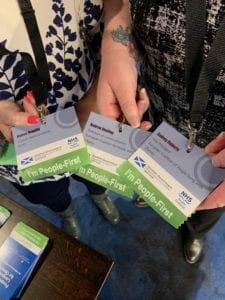 By using Person/People First Language, you can avoid marginalisation or dehumanisation (either consciously or subconsciously) when discussing people with a chronic illness or disability. It can be seen as a type of disability etiquette but person-first language can also be more generally applied to any group that would otherwise be defined or mentally categorized by a condition or trait (for example, race, age, or appearance).

Person-first language avoids using labels or adjectives to define someone, utilising terms such as “a person with diabetes” or “a person with alcoholism,” instead of “a diabetic” or “an alcoholic.” The intention is that a person is seen foremost as a person and only secondly as a person with some trait. Advocates of person-first language point to the failure to mentally separate the person from the trait as reinforcing a sense that both the trait and the person are inherently bad or inferior, leading to discrimination whilst also implicitly reinforcing a sense of permanency even regarding issues that are likely to be temporary. For example, a person with a substance use disorder has a fair chance of achieving long-term remission—many years in which they are healthy and productive—but calling them a “substance abuser” reinforces an unspoken sense that they are inherently and permanently tainted and casts doubt on maintenance of remission.

Person-first language is the standard for respectfully addressing individuals with chronic conditions & diseases. Rather than labelling people by their disease, physicians, clinicians and scientists recognise the need to understand, and address the unique barriers to dialogue associated with obesity.

We demand to be referred to in non discrimatory, Non Stigmatising and non offensive terms. 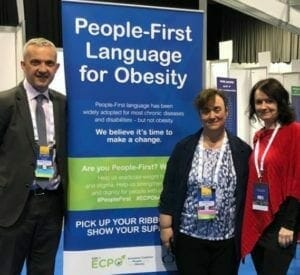 To reduce negative feelings in an individual, it can be helpful, and we ask to emphasise that obesity is a clinical term, rather than a description of physical appearance.

EXAMPLES of how to use People first language